A convoy of 40 vehicles

What does it take to get five massive digesters and one accumulator from Lappeenranta and Teuva in Finland to Virton in Belgium? The answer is quite a lot. Especially when the route includes passing dozens of roundabouts, going under thousands of low hanging electric cables, and passing through several small villages and towns in southern Belgium. 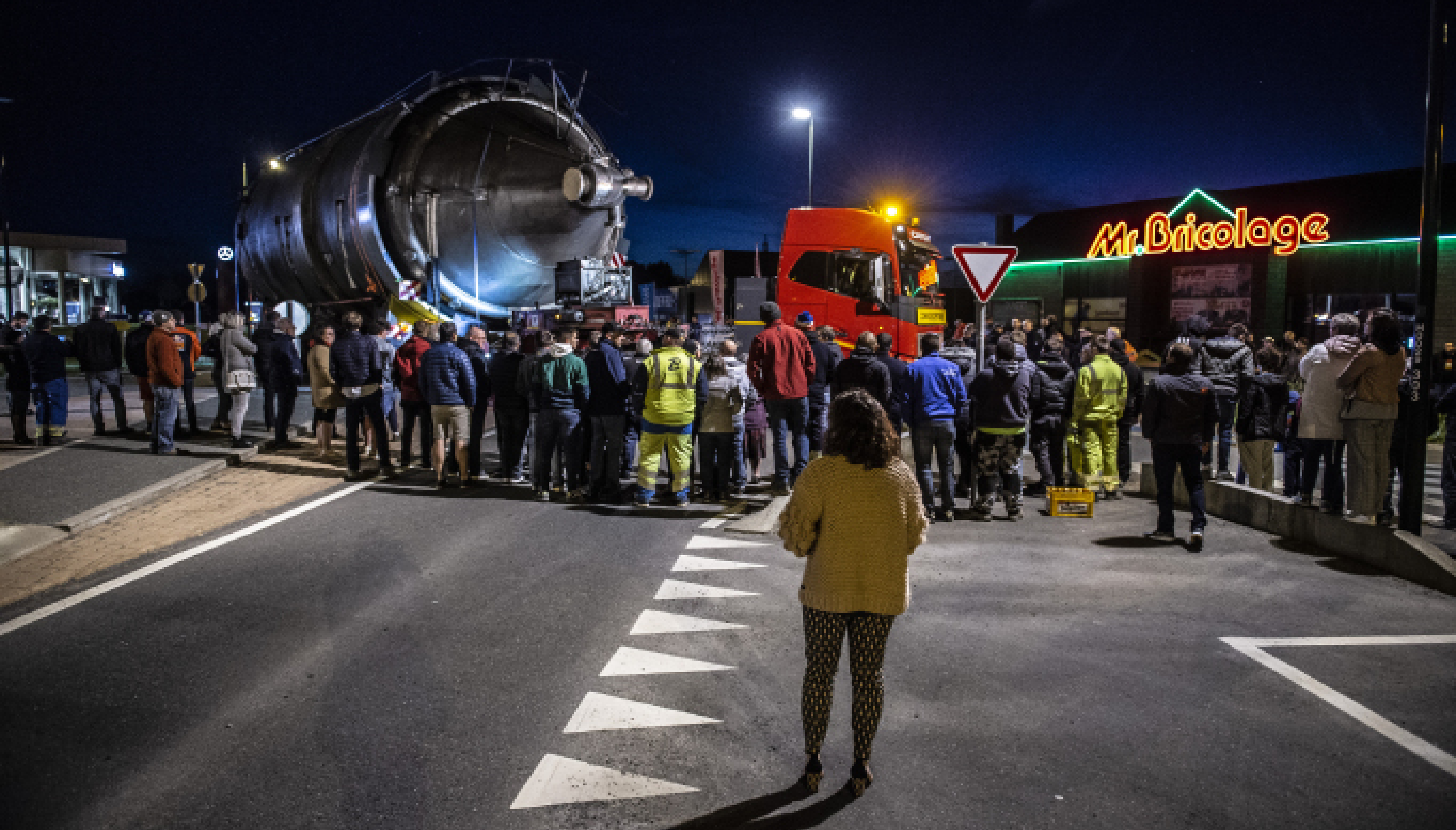 The convoy itself ended up including a total of 40 vehicles, when counting all the supporting vehicles and escorts. An astonishing site for everyone watching along the route.

The paper mill Burgo Ardennes in Belgium is growing and has now made an investment of 32 million euros. Valmet is the main supplier of equipment for the mill, including the most recent batch of digesters and a liquor accumulator. The massive pieces were produced in Finland and had to be transported directly to the paper mill in Belgium – not an easy task considering the size of the pieces.

425 tons and 4900 cbm in one shipment
Tschudi Logistics was responsible for the logistics task door-to-door. This included handling all necessary permits, carrying out detailed route surveys, and finding the right people for executing the job. To minimize transport cost and to match the client’s schedule demands the transport was done in a single shipment. The six pieces with a weight of up to 72 tons a piece, a length of up to 21 meters and diameter of 6.3 meters were transported successfully and on schedule to site.

“This transportation task was very challenging. The route required dismantling of many obstacles along the way – we even had to construct a temporary road to enable a detour around a small village centre. On the final steps of the journey the trucks had an average speed of only 4 kilometres per hour. We were able to do the entire shipment in one go, which minimized the transport cost, says Jussi Heinonen, Head of Projects and Forwarding Tschudi Logistics Finland.

Crossing interchanges to avoid bridges
Tschudi Logistics and Valmet Technologies have over the past years established a fruitful partnership on several transport projects. The Tschudi team has handled all sorts of transports for Valmet Technologies, on land, sea and air – big or small. Jussi Heinonen explains:

“Project transports are both complex and rewarding. From the first budget indication in 2016 to the final contract was signed in January 2019 numerous investigations on different transport types and routes were completed. We ended up with the best possible combination of minimal transport costs and transit time.”

The transport’s total height (cargo + trailer) was near the 7,5 m mark. This meant that route preparations had to be done months in advance. These actions included tree pruning along the route and re-assembling of hundreds of electrical cables to higher clearances so the convoy could pass under them. Furthermore, hundreds more cables needed temporary disassembly or lifting, so the trucks could fit to pass.

The last leg in Belgian roads, was a fairly short distance of about 180 kilometers, but the complexity of the works and permit regulations meant that it took 7 nights to transit through. Obviously, this task was not possible without the right partners, and I am glad to see how we succeeded as a strong team. Thank you to OCTRA, Vuorsola Oy, G.Belin and all others involved.” Jussi Heinonen.

Contact your local Tschudi professional if you have an upcoming project. We will be happy to advise you.