Tschudi Logistics is all about large, heavy, oversized dimensions and sites and destinations difficult to reach. The challenge of transporting and discharging the bridge was really hitting the nail right on the head. We knew we wanted to be a part of this; a regional landmark with an expected lifespan of over 100 years and a project to showcase our skills once and for all. 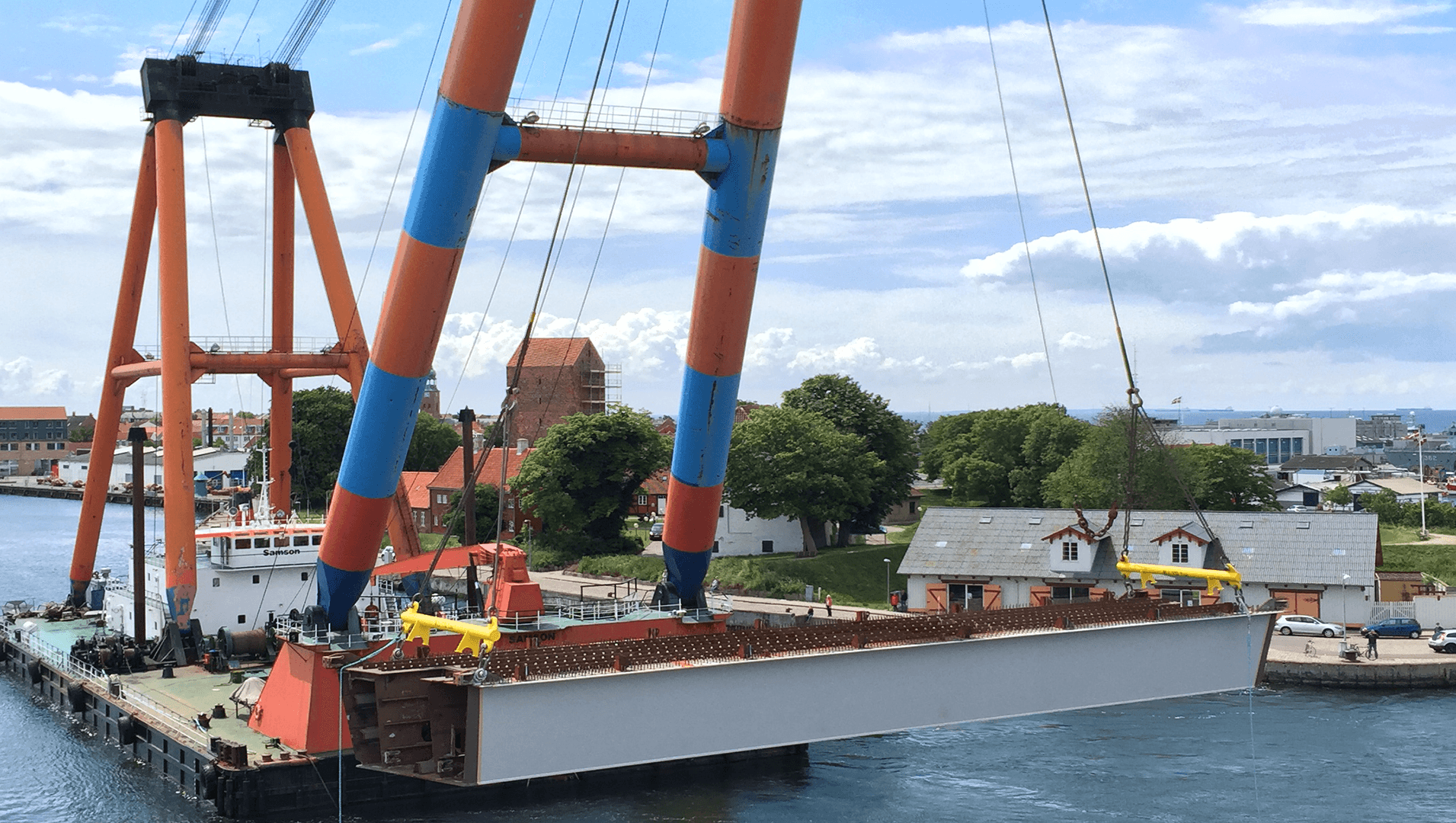 Through countless hours of constructive dialogue and discussion between ourselves, our client, and the many stakeholders involved in a project of this scale, we decided that the Port of Korsør, in Denmark, would be the optimal place of discharge and storage of bridge elements. In reality, the Port of Køge was closer but costs involved with removing obstacles en route from Korsør to site would end up proving more costly than the savings earned on the shorter distance, compared to setting out on trucks from Korsør. We rented approx. 5.000 m2 of storage area, where elements were to be stored and made ready for delivery to site.

The 26 bridge pieces arrived in 3 lots, of 10, 9 and 7 pieces respectively – over a three month period. All by either barge or vessel from Poland. All elements were discharged by one of northern Europe’s biggest floating cranes “Samson”, which we had chartered for this job. In fully upright position the crane boom reaches a dizzying 75 meters in height and she is capable of lifting up to 900 metric tons.

“A railway bridge crossing one of the busiest highways in Denmark – through a swamp like area and at an almost impossible angle?” This was our initial thought when we first received the Request for Quote (RFQ) for the TP30 project, back in September 2013.

All elements were discharged onto trailers which then placed them safely on specially built and certified supports, using only the trailer hydraulics and hereby avoiding the use of land or mobile cranes for storage operations. A clever time and cost saving solution.

The Danish Road Directorate, responsible for the state-owned roads in Denmark, described the transport from Korsør to the site in Vallensbæk as one of the biggest and most complex jobs ever completed in this region. Just imagine transporting a bridge element of 40 meters in length, 6 meters in width and with an overall height including the trailer – resulting in the removal of the guard rails in the middle of the busiest highways in Denmark, crossing over to opposite lanes in order to get sufficient bridge clearance for the truck to pass under and of course stopping all regular traffic in both directions. Add the fact that the cargo weighs in at approx. 200 metric tons, it has to be transported at night and it cannot go faster than 30 km/h. Now image doing this 26 times – considering fixed delivery times due to crane and mounting operations on site and massive costs involved with potential delays.

At the pinnacle of this transport we had 8 trucks moving in 2 separate convoys – each spread out over more than 400 meters, guarded by 4 police cars, 12 escorts and 18 TMA Trucks, and all on a single night. Surely a new record for Danish roads!

On the 24th of September 2015, more than 2 years after receiving the initial RFQ – we delivered the final element, hereby concluding what has surely been one of the biggest jobs in the Tschudi Project Transports history. In total more than 4.000.000 kg and 11.000 cbm of cargo was discharged, stored and delivered and the bridge is now spanning the 512 meters, resting firmly on its foundation for generations to come. Just outside Copenhagen at what seemed like an impossible angle and in a former swamp like area!

Our client will now begin casting a 16 meter wide concrete deck which the 250 km/h high speed trains will travel on in 2018. A real testament to engineering and to what is possible – as long as we are ready to meet challenges head on.

We are again proving that we can compete with the large industrial players.